‘Eating and drinking are evolutionarily important and therefore produce pleasure, but too much of a good thing can lead to health problems like obesity’

Eating and drinking are evolutionarily important and therefore produce pleasure, but like any of the other pleasures, manifest as a double-edged sword when taken to extremes. For instance, too much of a good thing can lead to health problems like obesity. 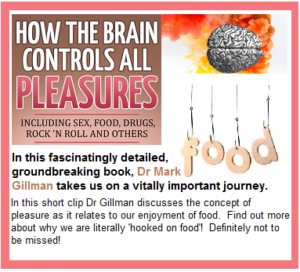 We are so used to eating and drinking, we seldom if ever stop to spare a thought and contemplate the magnificence of the mechanics of our bodies and what makes these extremely complex processes seem so simple

Instead of taking eating and drinking for granted, we should acknowledge how lucky we are to have such amazing bodies.

We have a certain measure of control over what we eat, particularly when we have enough to sustain life. Before eating and/or overindulging in foods that are unhealthy, stop for a few minutes and count to fifty, while carefully processing not ‘your’ want but rather your ‘need.’

We sometimes overindulge. Fortunately, some of our food choices during overindulgence are learned

We therefore have the ability to limit and guide our overindulgence using our own mental processes. Again, stop for a few minutes and count to fifty, while carefully processing not ‘your’ want but rather your ‘need.’   And where your own ability is too limited to cope do not hesitate to seek help from an outside source such as family, friends or health professionals.

Chocolate is difficult to resist – Beware! Again, stop for a few moments, think it through carefully, while considering not ‘your’ want but rather your ‘need.’ Usually, if you think about it for a few minutes you will be able to resist.

Apart from anorexia nervosa, the majority of eating disorders result in weight gain.  And obesity is a major health problem throughout the world because it is accompanied by a number of potentially fatal diseases. For instance, obesity is associated with significant diseases such as diabetes and possibly even cancer. Be overweight at your own risk!

We must recognise that voluntary weight-loss is not easy and straightforward,    because we have to learn to control something that produces pleasure by stimulating the same pleasure systems that control all our other physiological pleasures.  In some respects, the goal of long-term weight-loss is even more difficult to achieve than giving up an addictive drug because it means controlling something which is vital for everyday life. Unsurprisingly, obesity has a number of features in common with drug addiction, because feeding is a physiological ‘addiction’ and uses the same underlying processes that produce pleasure.   Again, we are faced with the unpalatable truth that without our physiological addiction to pleasure our species would become extinct.  Consequently, obesity can be an intractable problem, particularly when normal food intake is necessary for our survival. As my mother would often say, ‘being overweight is a life sentence.’

Another problem with overeating is that like drug addiction and alcoholism, overeating is often associated with stressful life events.  In fact, many people who overeat regard certain foods as ‘comfort foods.’  When dieting, keep away from these.

While often ignored as such, obesity is a form of malnutrition which can have the same eventual effects as starvation i.e. death.

While anorexia is accompanied by weight loss, it is similar to other eating disorders in that it seems to be caused by a disturbance in the pleasure systems of the brain.  As a result, treating anorexia is as intractable as treating any other form of eating disorder. Anorexia is also a very dangerous illness with the highest mortality rate of any mental illness. Parents and victims of anorexia beware!