‘Falling in love should not be taken lightly’

How the Brain Controls all Pleasures Including, Sex, Food, Drugs, Rock ‘n Roll and Others is the latest book by Dr Gillman.

Falling in love should not be taken lightly. Like most of life’s pleasures, it can also be a two-edged sword. While it is one of life’s greatest pleasures it carries some very real dangers. Enjoy it but also be aware of the hazards. 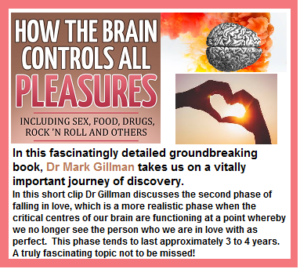 Owing to their survival and evolutionary significance, lust and the urge for sexual contact release gigantic forces.

If you are wondering whether there is such a thing as a love hormone, or love molecule that governs our behaviour then you have come to the right place.

Over the ages, most religions have attempted to hold these forces in check by propounding the necessity for monogamy and the intellectual concept of sex with love wrapped up in marriage. However, as shown by the regular occurrence of extramarital sex throughout the ages, religious driven morality has only been partially successful. If indeed, the concept propounded by religion was true to our biology, then monogamy would be much more successful than is the actual case. In the western world, lust and sex often occur quite openly and also where the love and/or marriage element is not necessarily involved.  Thus, in the western world we seem to have come full circle, where sex, love and marriage are accepted by many, and in certain circumstances, as mutually exclusive. For this reason, and because not everyone agrees with the western approach, we need to be careful of engaging in sexual pursuits merely for pleasure. However, in certain circumstances sex only for pleasure and the accompanying release and antistress effects may actually be desirable.

Love should not be considered merely as trifling and unnecessary

Initial love and the ensuing lust are blind, as revealed by the euphoria, excitement and belief that the loved one is faultless and/or perfect. Fortunately, initial love eventually changes to more stable forms of love attachment where reality settles in over time. It is also important for maternal love to enable the mother to deal with the practical difficulties of raising a child. These problems must also not be underestimated, particularly since the child’s main mode of communication is either by silence or protest. Clearly, when raising an infant, attempting to satisfy a myriad of needs without a strong maternal-infant bond would be both tedious and often unpleasant.  Clearly, the love attachment between mother and child is the usual rule; otherwise infant and child neglect and even infanticide would be much more common.

Consequently, the dissolution of a relationship may be extremely distressing. When entering a love relationship, the possibility of a break-up should always be kept in mind, a fact that was forcibly brought home by a lawyer who warned a young couple that their ante-nuptial agreement should anticipate a potential divorce.   Sage advice for all who enter a potentially long love relationship, whether it is within marriage or not!

Nothing much has changed as illustrated by the divorce rate, and more importantly, the average time it takes to go from marriage to divorce which is approximately 4 years. At four years most human children can survive without the same intense mothering needed during infancy and very early childhood. Clearly, for a marriage to last beyond the initial four years, especially during the stage when intimacy and lust decline, it is necessary to find another common bond which is usually the development of friendship. In most cases, if you have not developed a friendship with your love partner after approximately four years, the relationship is likely to end in divorce or dissolution.

Remember the brain is the biggest and most important sex organ!