Most addicts take drugs and/or alcohol because they stimulate the pleasure center of the brain that is the same pleasure pathways of the brain as those activated during our natural pleasures. However, there is a distinct difference; addictive drugs and alcohol stimulate the pleasure systems artificially. As a result, the homeostatic mechanisms come into play to try and protect the brain and body from the unnatural onslaught. Consequently, the pleasure sought by the addict through their drug of choice soon has the potential to change into pain as the body adapts. We have at our disposal a vast array of other natural methods which can be used to stimulate our pleasure brain or pleasure center of the brain without provoking an overreaction of our homeostatic mechanisms.  Beware – don’t manipulate your pleasure system using artificial means! 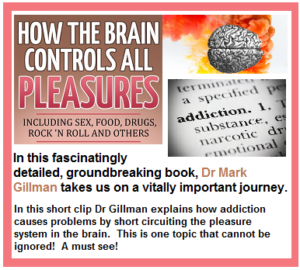 One of the crucial messages this book attempts to convey is that we survive because we have physiological addictions to eating, drinking and other physiologically derived pleasures. In other words, without an addiction to the natural survival directed pleasures, e.g. sex and eating, our species would eventually become extinct. As a result, there is an important and unfortunate consequence when using any addictive drug, including legal drugs like nicotine. The insoluble problem is that by taking pleasure producing drugs we are artificially stimulating the self-same pleasure center of the brain and pleasure systems that mediate our physiological pleasures.   Consequently, it is unlikely that a medicine can ever be developed to successfully cure addiction. In order to do so, the hypothetical magic bullet would have to simultaneously block the pleasure systems that are the very keys to addiction, while leaving the self-same survival pleasure systems unaffected. It is therefore an inescapable fact that a cure is unlikely to be effected without the addict accepting the harsh truth, that is that they actually have a problem. While the realisation and acceptance of this truth may not guarantee a cure, it is the first step on the path towards recovery which requires a great deal of commitment and dedication in order to overcome the addiction.   Without these essential changes in attitude all existing treatments are unlikely to prevent recurrent relapses.

The addict should also realise that like a physical illness (e.g. cancer) relapses often occur, although a cure is still possible.

Hangovers – once we have artificially stimulated the protective homeostatic mechanisms, the body is temporarily unable to adequately cope without the artificial stimulant. Alcohol is an excellent example of what follows when we artificially stimulate the pleasure center of the brain. Even when we are social drinkers, and not addicted to alcohol, the consequences of overindulgence can be alarming. Occasional excessive social drinking can lead to the morning after hangover, which is usually an extremely unpleasant experience. One of the strong motivations for alcoholics and other addicts   to relapse is to prevent the misery of the hangover or withdrawal that follows addiction in the absence of the addictive substance.

Now that we have entered a relatively scientific era, a moralistic attitude towards addicts and alcoholics is totally out of place, particularly as there is now overwhelming scientific evidence in support of the view that addiction is a mental illness. Further, it is often complicated by the presence of another co-existing mental disease. The lesson is that if you or someone close to you is an addict,   professional help is needed to overcome the addiction along with the possible co-existence of a psychiatric disorder.